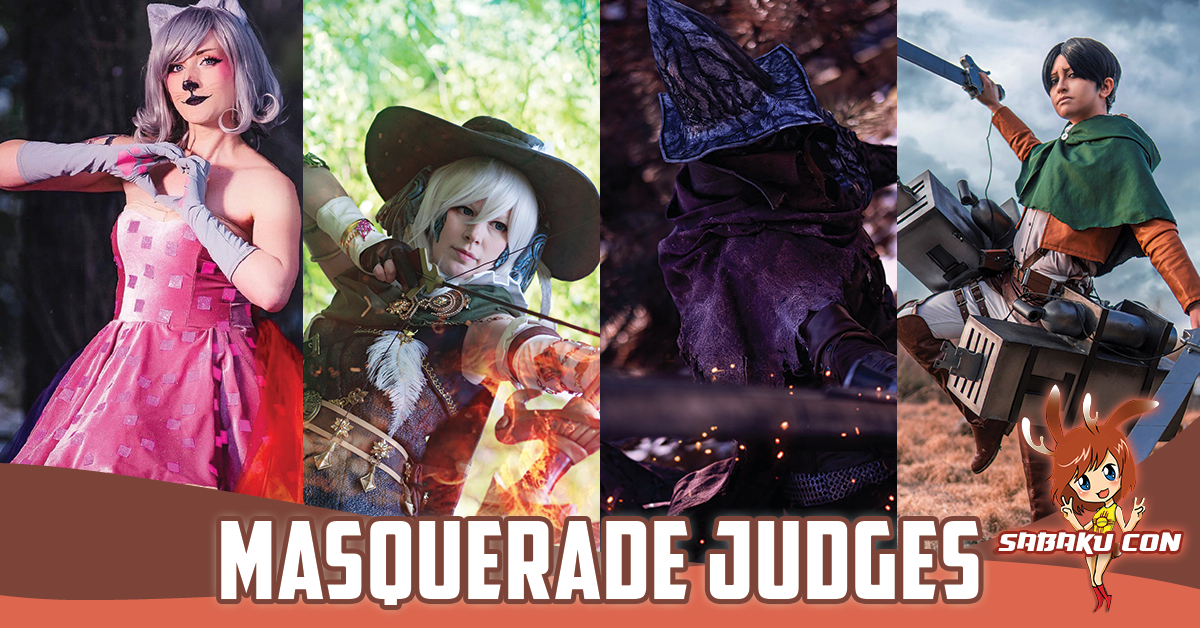 Please welcome our Judges for this year's Masquerade!

Paige of Illuminaughty Cosplay is an Arizona-based costume designer, cosplayer, and twitch streamer. She found out about cosplay after attending Saboten Con 2015 and hasn’t looked back since. She’s gone on to enroll in a costume design degree, compete in masquerades and competitions, as well as try to convince anyone and everyone to cosplay. She says that cosplay is an art with no right or wrong, the way you interpret a character is up to you! When she’s not crafting a costume, she’s streaming on twitch to connect with other video game fans or catching up on anime!

Ex-shadow and Malindachan are a veteran cosplay duo that have been crafting costumes for more than 15 years. Both are well-rounded in a wide range of abilities and continue to learn more with every costume made. They strive to be good role models to the community and are ongoing advocates of cosplay being for everyone. Over the years they have won numerous awards for their craftsmanship and performances, and they enjoy sharing their knowledge with others. In 2020, they became full-time creatives between a combination of contract work and running their own cosplay accessory shop, Turtle Smithy.

Malindachan (Malinda) especially loves sewing and wig styling, and you might be familiar with the numerous tutorials she's created for Arda Wigs. Malinda has been invited as a guest speaker and contest craftsmanship judge internationally including events such as Anime Central, Project A-kon, and MCM Comic Con. Alongside Arda Wigs, she’s collaborated with brands such as Simplicity Patterns, McCall’s Patterns, and Sideshow Collectables.

Ex-Shadow (Kyle) has had a passion for breathing life into his favorite characters since he was a kid. His specialties are armor and props, but he’s no stranger to sewing either. Like his wife Malinda, he has traveled far and wide as a cosplay panelist and judge. A few of his accomplishments include being the first winner of C2E2's Crown Championships of Cosplay and creating armor patterns for Simplicity.

Berna Kenshin is a New Mexico based Hispanic cosplayer and costumer with eight years of experience specializing in costuming and special effects makeup. She has also been featured in AMC’s Better Call Saul, receiving IMDb credits for her acting and costuming work. She has worked on set for several television and film productions. When she’s not working on set, she makes costumes and props for cosplay as a hobby. Her cosplay work has been published in numerous international cosplay magazines. She is well known for her Attack on Titan and Splatoon cosplays on social media. She looks forward to meeting new cosplayers and hosting panels for other cosplayers who wish to learn her techniques.

Performing Sabaku Con's Masquerade Halftime show is the one and only Kazha!